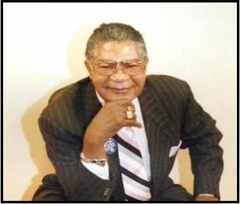 Pastor Emeritus McMearn entered into the ministry  in March 1967 and was ordained on July 21, 1968 at the New Hope Baptist Church in Pueblo, Colorado.

Through divine inspiration from the Lord, Reverend McMearn was led to organize a Prayer Band and Bible Study Group which after some time led to the founding of The New Jerusalem Missionary Baptist Church.

Pastor McMearn, better known as Pastor Mac, faithfully served the New Jerusalem Missionary Baptist Church  and the Colorado Springs/Fountain/Widefield Communities for 40 years.  His leadership has birthed and developed over some 30 son’s and daughters in Ministry.

In October 2012, Pastor McMearn listened to the direction from the Lord and officially retired as Senior Pastor of the New Jerusalem Missionary Baptist Church.   Although he is no longer pastoring, he still follows the direction of the Holy Spirit and has focused his ministry on continuing to provide support and love and Ministry of presence to the Elderly.

Pastor Emeritus James McMearn has transitioned to be with the Lord on May 31, 2016. A Servant worthy of his calling.
Reverend McMearn married the former Mary Ann Jarnigan and celebrate 48 years.   They are the proud parents of Elizabeth and James and  have three grandchildren Elijah David Jefferson, Delana Eliza Rose Jefferson and most recent addition Ma’kyia Maxine McMearn.